After a week in Uvita, we left the coast and headed somewhat inland to the small town of Miramar where our friend Jasona lives. I was excited to see what she’s been up to, witness the work she’s been doing with her place and to see Shakti again. I had an inkling that Taio and Shakti would get on well. I was right! Shakti is an incredibly loving, spirited 5 year old sweetheart. We all enjoyed our time with this darling. The kids played so well together, exploring the property, digging, “doing work” and  splashing in our make shift sprinkler. 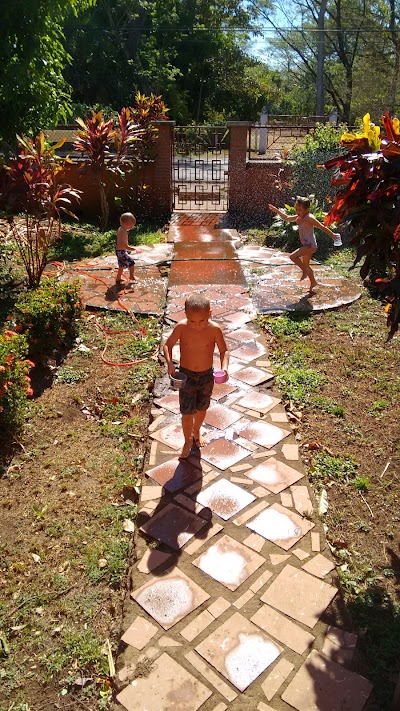 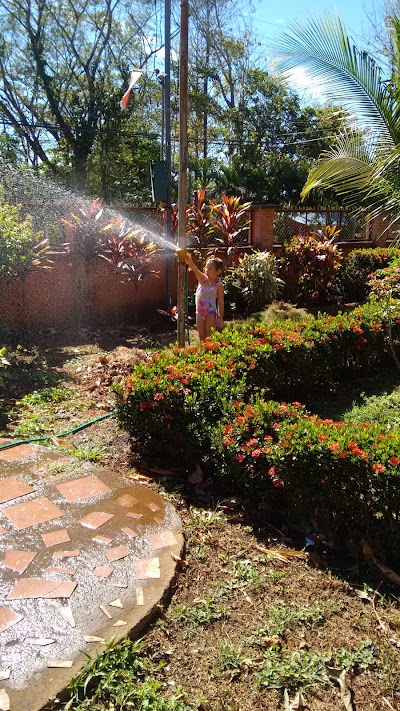 Jasona’s property is a work in progress as the lady that lived there previously was aged and unable to maintain upkeep. The house is charming with good bones and the yard is full of fruit trees. And I mean full- oranges, mangoes, papayas, bananas, guanabana, to name a few. And more are being added- other vegetables, peppers, herbs and plans for raised vegetable gardens. It’s a similar vision I have for our home one day.

Jasona’s Mom, affectionately called Grandma by everyone, was also staying at the house; at least for the next 6 months. We ended up spending much of our time chatting with her and spending time together. She reminds me a lot of Clint’s Mom: hard working, lovely and nurturing. She spoiled us with her frequent coffee refills, delicious stir-frys and homemade tortillas.

Also staying in the house were two volunteers, Shez and Alex, a married couple from England. In exchange for room and board they are there to help with the planting and harvesting of fruits and vegetables, learn about organics, permaculture and more or less experience Costa Rica life. They were really great and I’m happy to have spent a few days getting to know a little about them. Alex also made the most amazing daily salads from fresh, local ingredients which I thoroughly savored.

So as you can see we were a full house! Yet another aspiration of mine is to live among a community of like-minded individuals. Perhaps not all of us in the same house but definitely sharing a large piece of land and working together to grow and harvest our own food, fostering a sustainable, organic and cooperative environment.

Back to Miramar. A small town located 110km west and slightly north of the capital San Jose, the mountainous region offers a beautiful backdrop. Despite it being a small town, we found ourselves some adventures. We tried out the local cuisine a few nights. What was great about the restaurants (besides the food!) was that they both had playgrounds- Little Tykes kitchen sets and play structures, swing sets, slides. I’ve never seen such a thing at a restaurant. What a treat for Clint and I who could have a normal, adult conversation without interruption while we waited for our dinner; whilst the kids played. Win-win! 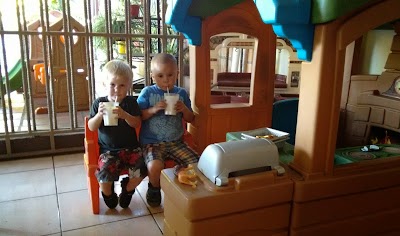 On another excursion to the local pool, we had quite the experience. It was totally random for such a small town but the pools were amazing. See photo section. As we passed through the little building that was the entrance we immediately saw two pools and two slides. Clint joked that Taio could do whatever he liked here as Costa Rica tends to be more lax with their rules. We’ve had some encounters in the past where Taio was denied access to slides because he wasn’t big enough, tall enough, etc. Especially in the US where they are fearful of law-suits. Such a thing doesn’t exist here and it was pretty much free reign. There were no lifeguards on duty and the only person “working” there was the lady at the entrance collecting fees. Clint’s comment on the rules turned out to be true in more ways than he imagined.  As we walked down towards the pool we spotted a couple in the corner of one pool who seemed to be involved in an intense make out session. But as we got closer we quickly realized that in fact they were actually fornicating. Yes, you read that correctly. Seriously, in the middle of the day and surrounded by children and other families! What was even crazier was the complete disregard of the behaviour by the other patrons- adults and parents alike. As if it were a regular occurrence. What we found to be even funnier was that there was actually a sign at the pool stating that obscene behaviour would not be tolerated. Regardless, Taio and Xavier had fun swimming and going down the slide…in the pool where the dogging wasn’t happening!

So that was Miramar. Fun times with new friends, in a new place and always interesting! After 5 nights with Jasona and friends, we set off on yet another adventure. This time on the local bus! We were supposed to catch the bus at 8:30am from Miramar to Samara, a small beach town in the southern part of the Guanacaste coast. Me being me, I wanted to be early for the bus so that we didn’t miss it. I should have known better. We ended up waiting for nearly 1.5 hours before the arrived at our stop, more than an hour late. We had to switch buses in Nicoya and from there it was a quick 50 minute ride on to Samara and to ultimate paradise. More to come on our time in Samara. We’re actually still in the area, 10 days and counting!